A windy September made sure that the W.E.B power plants started off into autumn with great results. 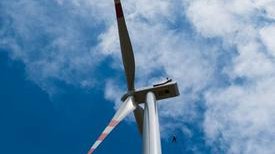 From a meteorological point of view, autumn begins with the month of September. And we can certainly confirm that because after a highly successful wind month with our total production of 62,477 MWh staying above target, our plus in production based on our annual projections has once again begun to grow.

In early September, we could even experience the wonderful Indian summer with temperatures rising up to 30°C in Austria. Then, however, autumn treated us to typical weather with some precipitation and rather windy days. The time had come for our wind power plants to wake up from their “summer sleep” and welcome the stronger winds. Our Austrian plants started off into autumn with best relative results one after the other.

Austria was September’s driving force and came up with the top nine wind parks of the month. Our plants in southern Bohemia were also blessed by these favorable central European weather conditions and lifted the Czech Republic up to a production plus. Moreover, France exceeded its target as well, while Canada turned in an excellent finish to get a place on the podium. Our production in northern Germany stayed below target, though, due to the rather moderate start of the season.

In Austria and Germany, our hydroelectric power plants stayed below target due to the algae infestation interfering with production at Eberbach and the continuing trend of hardly any rain.