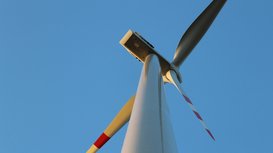 The overall monthly production of 101,989 MWh clearly exceeded its target for October, making it the best monthly result in the corporate history of W.E.B.
The names of the energetic helpers were Xavier and Herwart: in early and late October, the two storm fronts swept across Europe with winds going far beyond 100 km/h, playing a considerable role in the beautiful production results. Austria, Germany, France, and the Czech Republic concluded the month on the positive side. Moreover, Canada and the United States had their own stormy weather and were able to deliver positive results as well.
A special aspect worth mentioning was the excellent operation and production of all our plants at the usual high availability and without any major problems despite the hurricane. On the most intense storm day alone, the Control Center processed some 1,500 events – about the same as in an entire month for a normal October.
The photovoltaic segment stayed on target in Austria and Italy, but remained below expectations in the Czech Republic.
Austria and Germany also performed better than expected in the hydroelectric power segment.