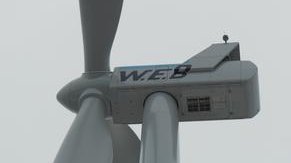 Weather conditions in June were not optimal for the production of electricity from W.E.B’s wind turbines. Periods of high pressure at the beginning of June caused a below-average monthly result. In the second half of the month production washowever on target. Nevertheless, the lag in production could not be reached in June.

The 197 W.E.B-wind turbines produced 31.790 MWh of green electricity, which is far below target.

Worthy of note is the production of the Canadian power plants, which exceeded production targets by 5.5 per cent.