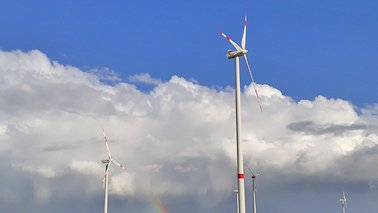 The overall monthly production of 59,925 MWh was below target. July 2019 marked the month with the highest average global temperatures since the beginning of measurements (refer to the Copernicus Climate Change Service). Temperatures were only marginally higher than in 2016, when the effects of the climate phenomenon El Nino were particularly strong. Temperatures considerably above 40°C in large parts of Europe, even in Northern France and Germany, brought air masses to a standstill. As a consequence, production results from wind power did not meet the targeted levels at all, neither in Austria, Czech Republic, France and Italy nor in Canada and the USA. The only place where wind conditions corresponded to normal levels at this time of year were in Northern Germany. Moreover, the good wind conditions also generated the first kilowatt hours at the Wörbzig RI Wind Farm (6 x V136 turbines) recently put into operation, leading to more positive German production results. Compared to the climatological average, Austria’s hours of sunlight were slightly above average, and in part showed major regional differences. The photovoltaic facilities in Austria, Germany and Czech Republic generated more electricity than the expected target value.

W.E.B reported a negative production deviation in Italy. The hydroelectric power segment remained below target in Austria and Germany in July 2019.