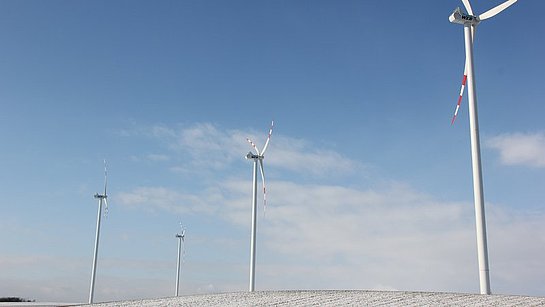 The year 2018 could be characterized as quite challenging in retrospect. While wind farm operators suffered from weak wind conditions, the sectors of agriculture and forestry were in a constant battle against periods of extreme drought. In as many as ten months of the previous year, the mean temperature surpassed the long-time average, making 2018 the hottest year in over 250 years of weather data recording (see ZAMG). Climate change is taking shape with frightening clarity and speed. It is, therefore, all the more important for us to continue and redouble our efforts on the path towards energy transition.

W.E.B has been staying true to its mission as a dynamic wind power pioneer and put a total of 48.5 MW in wind energy and photovoltaic power in operation in France, Italy, Germany and Austria. Our steady growth in power plants as well as excellent wind conditions in December helped W.E.B to accomplish another milestone at the end of the year: W.E.B was able to generate 126,565 MWh in December 2018, the best monthly production results in corporate history. They are even 5.5 percent higher than last December’s results! Nevertheless, our annual production could not keep up with last year’s annual results due to weaker wind conditions in 2018. In the end, our meters stopped just below the 1 TWh mark at 974,437 MWh.

December’s mild weather and excellent wind conditions lead our production to an all-time high
The overall monthly production of 126,565 MWh exceeded our target for December by such a huge margin that W.E.B was able to celebrate a new production record. Our newly commissioned power plants in the year 2018 with a total capacity of 48.5 MW played a considerable role in this great success.

Early December presented us with a significant change in weather conditions, when troughs of Atlantic low-pressure systems finally advanced to Central Europe and brought powerful air masses and much-awaited precipitation with them. As temperatures remained rather mild at least in lower altitudes, any icing problems were quickly resolved. Austria, the Czech Republic and France partly accomplished a clear plus in production, while Germany could not reach its target due to a lack of wind in the northern regions. Canada experienced extended periods of iced-up rotor blades and could not perform as expected. Our production results in the United States were clearly above target.

The hydroelectric power segment could not perform as projected once again due to the continued dry period.