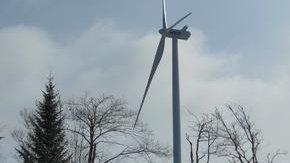 May weather in April – production below target: this year’s April turned out to have quite some unusual weather as well. The combination of unusually warm temperatures, first thunderstorms and long periods of weak winds led to production results of 44,196 MWh. This means that the production target for April could not be reached.

After lots of sun in March, the same weather trend continued in April 2014. Only in mid-April, traditionally changeable conditions improved wind results. The wind calmed down by the end of the month and forced the wind division to stay below target by -11.3%.

Photovoltaic energy production turned out to be highly diverse. In many parts of Europe, April was unusually sunny and caused good production results at Dobsiče, Seiersberg, Weikendorf and Pfaffenschlag. Other regions, however, suffered from bad weather conditions, e.g. Montenero. Overall solar power results remained a little below target: -3.7% in April.

Even though April presented us with the first decent rainfall after a long dry period, our hydroelectric power plants still registered the water inflow considerably below average. Therefore, our hydropower division stays below the production target levels at -36.4%; Imst still benefits from melt water (-25.8%); Eberbach is even weaker (-53.2%).

A comparison between countries shows clear differences: stormy wind conditions were most common in Nova Scotia which, despite a few shutdowns, was able to reach its production target. Our German renewable energy plants remained just below target (-2.9%) with the best results in the Mecklenburg-Vorpommern region. The solar yield was particularly positive at Dobsiče (+13.0%), while a few bad weather periods stopped Italy from getting any better results (-6.1%) in the second half of April. The lowest wind yields were registered in Austria (-14.4%) and France (-21.8%), where both the beginning and end of April were too calm in terms of wind.