W.E.B production in May 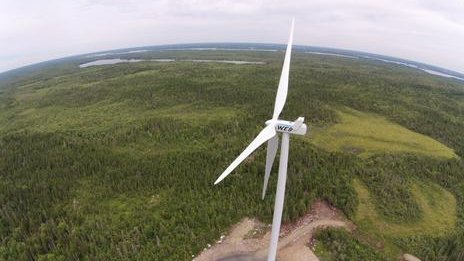 Following the excellent weather conditions and production figures in the first four months of the year, W.E.B was able to maintain this success in May. With a total of 54,629 MWh, once again more energy was generated than planned and the wind, solar and hydropower segments all delivered positive results.

The first days in May were relatively calm and thus provided only limited yield, but subsequently the remainder of the month went according to plan. Especially in the last week of May excellent wind conditions resulted in sizeable surplus production in Austria and Canada, which in the final analysis facilitated the positive monthly result. All in all, the highest use of capacity was achieved at the wind plants in Canada (the photo shows the Black Pond turbine), although output in France, Austria and Germany also exceeded expectations. Wind yield was only slightly down on the planned level in the Czech Republic.

In spite of the fact that the sunshine statistic from the German Met Office showed a below average figure for Central Europe, the PV segment was nonetheless able to register a positive result with the plants in Italy performing particularly well.  The second PV-plant in Pfaffenschlag went into operation on the roof of the design office and provided another 17 kW of Waldviertel solar power.  Electricity generation at the company’s hydropower plants was also satisfactory with Imst providing clearly more power than expected and Eberbach’s output being slightly higher than planned.