The commissioning of new power plants combined with excellent wind conditions at the beginning of the year enabled W.E.B to achieve exceptionally positive half year results. 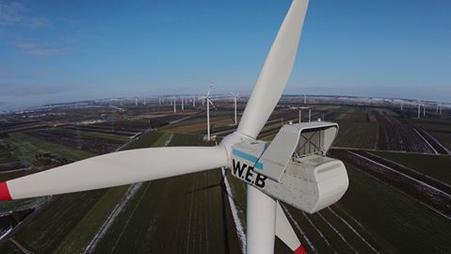 Four months of excellent wind conditions – from January to April – were enough for W.E.B to exceed its target in the first six months of 2015. The same positive trend continued in May, making it impossible for the weaker wind conditions in June to interfere with the success of the first six months. Revenues increased by 25%, EBT by 56% and W.E.B earnings per share rose by 50% from EUR 15 to EUR 22.6 compared to the previous year. Needless to say, we cannot simply double these results to get to our annual results because the summer months July and August are usually the weakest wind months of the year. Nevertheless, there is some reason for hope to achieve another record result after 2014.
The positive W.E.B mid-year results are not exclusively based on the strong winds at the beginning of the year but also on our new power plants, primarily in Canada. In Nova Scotia, new power plants were put into operation at four more locations between January and April. In consequence, W.E.B revenues could be increased from about EUR 500,000 to more than EUR 3.5 million just in Canada. In Auersthal and Spannberg, six additional plants will be added in the course of the fourth quarter 2015. Their 16 MW of installed capacity could also provide their mite to the next successful annual result.