2014 was a challenging year for production, as clearly below-average wind levels and numerous network shutdowns due to transmission line and substation enlargement hindered output. 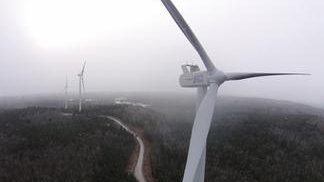 Nonetheless, a new production record of 616,339 MWh was attained, due largely to the commissioning of highly efficient turbines and stable plant operations.
The start of operations of our first three plants in Nova Scotia proved particularly satisfactory and even the demanding production targets were surpassed.

The tough climate provides the ideal conditions for the generation of wind energy and therefore in 2015 we are looking forward to a marked increase in the wind harvest in Canada following an 11-plant portfolio enlargement.

The photo shows the first three turbines at Martock Ridge, which have just become operational.
It should be added that new wind parks in Austria and Germany have also provided a further increase in production potential. Consequently, healthy growth and another rise in energy output can be anticipated in 2015.

With output of 78,787 MWh, December 2014 saw the setting of a new company record for monthly production.  Powerful winds, stable power plant operations and newly installed capacity made this success possible and ensured a pleasing conclusion to a year that until now has been characterized by below-average production.

Not only were temperatures in December 2014 higher than usual, but it was also a very stormy winter month. This was due to a pronounced polar vortex and deep depressions over the Atlantic, which brought comparatively mild and windy weather to Europe. Production was particularly intensive in the last two weeks of the month, as turbulent weather from the west ensured that full capacity operations continued for several days at virtually all the wind power locations. By the end of December the turbines in the Czech Republic, Germany and Austria were furthest above the planned values, but Canada and France also exceeded their production targets.

By contrast PV electricity generation, which is generally low key in winter, was less successful. Planned output was only surpassed in Pfaffenschlag and Weikendorf, while at the other locations a lack of sunshine resulted in limited energy production. Our hydropower plants demonstrated differing results, for while the capacity in Imst exceeded expectations; the Eberbach power plant did not meet its targets in full.