The largest Canadian W.E.B-wind park on the net

In Nova Scotia four 2MW turbines went to the grid for W.E.B. Other ones follow shortly. 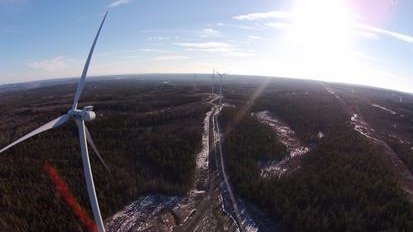 One after the other it now goes for W.E.B in Nova Scotia, Canada. In North Beaver Bank in the province of Nova Scotia four 2MW turbines went to the grid for W.E.B.

With the Vestas V100 turbines going into operation, this is now the largest wind park in Canada for W.E.B.

The wind parks total capacity is 8MW, the turbines were built again with our partner on site Scotian Windfields. Canadian manager Reinhard Kainz is enthusiastic about the new location: The wind park North Beaver Bank promises to become one of most profitable for W.E.B. On the one hand the wind situation in Canada is well known, on the other hand, the development expenditure was very moderate for Canadian conditions.