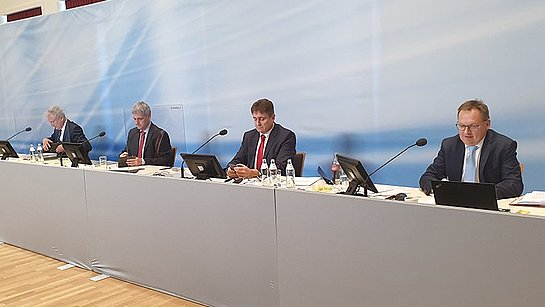 Then it was time for the report of the Board of Directors, Frank Dumeier and Michael Trcka, who offered a look back at the successful year 2019. They informed the shareholders about the current situation and presented a roadmap for the future of W.E.B. At the same time, the Board of Directors had to emphasize that the Covid-19 pandemic will also affect W.E.B, as it already caused a short-term collapse of electricity prices and delayed various construction projects. Nevertheless, the business model of W.E.B has proven stable and reliable, particularly in this crisis.

In contrast to the classic Annual General Meeting, the shareholders were not able to propose a motion, cast their vote or raise an objection in person but had to instruct the four independent proxies, Michael Müllner, Paula Resch, Andreas Zajc and Verena Brauner, to act on their behalf.

In the run-up to the Annual General Meeting, W.E.B had received numerous questions that were answered as part of the general debate. Needless to say, any inquiries sent via email during the virtual Annual General Meeting were addressed as well. After the general debate, the votes for the proposed resolutions were cast and the proposals of both the Board of Directors and the Supervisory Board accepted.

Josef Schweighofer thanked the shareholders and the W.E.B team for such a smooth first virtual Annual General Meeting, even though he also shared his hopes of being able to personally welcome the shareholders of W.E.B next year.

Find out more about the voting results here.