Photovoltaic systems from W.E.B to generate 1.5 GWh of solar power for SBO 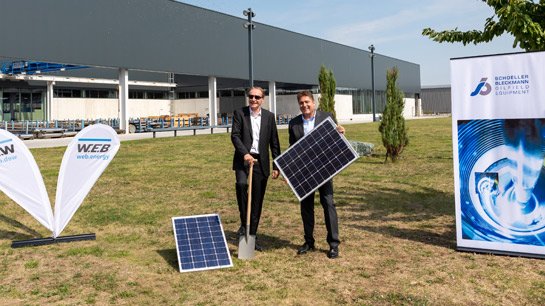 Schoeller-Bleckmann Oilfield Equipment AG (SBO) takes another step under its crisis-proof energy concept: solar power generated on the company’s business premises will supply the production at the SBO plant in Ternitz. The groundbreaking ceremony for the new photovoltaic plants was held by Gerald Grohmann, CEO of SBO, and Frank Dumeier, CEO of W.E.B Windenergie AG. Starting in 2023, the systems covering a generator area of 7,000 square meters will produce around 1,450 MWh of regional energy annually. This will avoid CO2 emissions amounting to 680,000 kg per year. In its "Strategy 2030”, SBO defined one of its targets as to further reduce the Group’s greenhouse gas emissions. The new PV systems will make a significant contribution to reach this goal. The already existing rooftop system has supplied 180 MWh per year, generating savings of 86,800 kg of CO2 per year.

“Global energy security is the fundamental topic of our core business, and so it is only natural for us to also take measures to ensure energy supply security for our own production. The new photovoltaic plant will deliver local, green electricity and cover a large part of our energy demand in Ternitz. We have launched similar projects at our sites in Texas as well, which will further reduce our CO2 emissions,” says SBO’s CEO Gerald Grohmann.

The photovoltaic plant will be built and operated by W.E.B, and the project will be realized entirely without any public subsidies. 100% of the solar power generated will be supplied to SBO on the basis of a 25-year Power Purchase Agreement (PPA). The ground-mounted systems will have a total installed capacity of around 1.4 MWp, with the modules being set up in east-west orientation (PEG system), so rainwater seeps into the ground unhindered and there is no sealing of open spaces. This system has proven itself repeatedly in W.E.B projects, thanks to its simple installation and sound solar harvest.

“Austrian companies need solutions in the current energy crisis. As this project shows, W.E.B is able to offer such solutions. This regionally generated electricity is a step toward energy independence for Austria and, on top of that, it is clean energy produced by the power of the sun,” says W.E.B’s CEO Frank Dumeier, indicating the direction to take for achieving the long-term transition to renewable energies.